Scourged Of Your Innocence Songtext

They live on fear, feed on flesh, a massive human barbeque
He wears the peeled off faces of his victims as he tortures you
They've committed crimes you'll never solve in a million years
He kills them off, sawed apart, one by one they disappear

Who will survive and what will be left of them?
Murders that never made no sense, scourged of your innocence

Unsuspecting he entered the farmhouse and took a mallet to the head
His girl was next, she was placed on a hook, left to bleed her dead
The next piece of fuck took a sledgehammer and crumbled to a fade
The invalid took the chainsaw, he was hacked up just the same

Chainsaw rips through flesh and bone with so much ease
Skulls made into ornaments, scourged of your innocence

Who will survive and what will be left of them?
Murders that never made no sense, scourged of your innocence

The only survivor of that night of terror told a tale of macabre and madness
She said she broke out of a window in Hell, screaming bloody murder
The authorities searched endlessly but they never found a trace
But you know that if he finds you that he's sure to beat you down
And peel back your fucking face

Scourged Of Your Innocence Video 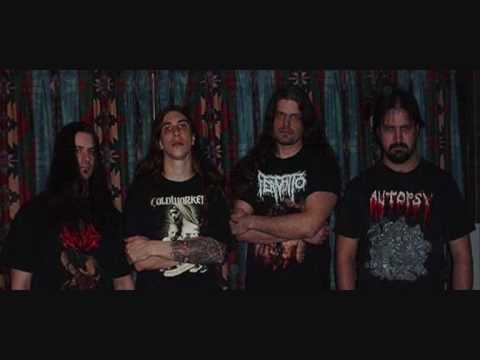